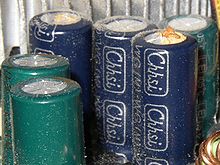 Bad Capacitors (or Capacitor Plague) is the failure of the capacitors on the system motherboard or other electronic components. The job of the capacitor is to filter out noise produced by the electricity supplied to the computer. When a capacitor is faulty or has failed, the noise from the electricity causes undesired effects to the way a computer opperates. Depending on where the failure occures there are different effects to the data & the way it is stored, processed, or dislayed.

Capacitor failure occures on personal computer motherboards, video cards, power supplies, & inverter boards (for LCD monitors). An incorrect electrolyte formula within a faulty capacitor causes the production of hydrogen gas, leading to bulging & deformation of the capacitor's case, & can potentially pop or explode. This is a known fault with almost every manufacturer of computer compents.

The problem with detecting or preventing capacitor plague is that the problem only occures after equipment usage over a period of time, most often years.

If you are expericing abnormal behavior in your computer, like the sympoms listed above, spotting failed capacitors is not difficult. Simply remove the side of your PC case, & look for expanded capacitors. In the situation of phantom reboots, the failed capacitor could exist inside of the computers power supply, which we do not recommend that you remove or open for visual inspection.

Should you discover that you have failed capacitors, or have a computer that is suspect to the effects of failed capacitors, please feel free to give us a call. We can replace the capacitors, usually same business day for the price of $65. There are multiple benefits to replacing capacitor rather than replacing entire components in your computer. For starters older equipment is more rare, so finding the exact replacment mother board could prove diffultcult, time consuming, & potentially could be very expensive. Throwing away working computer equipment is also bad for the enviornment, when just a couple of components on the system board can be replaced.